The weather in Menton, Cote d'Azur, is amongst the best in the whole of the France. The temperature in Menton is always a couple of degrees warmer than neighbouring resorts on the French Riviera, on account of Menton's unique micro climate. With hot summers and mild winters, Menton is the perfect French town to visit all year around.

The location of Menton, with its broad shallow bay and the surrounding hills, shelter the town from lower temperatures and winds and help contribute to a warm and dry climate. The beautiful climate in Menton is ideal for horticulture and has contributed to a plethora of beautiful Mediterranean gardens in the town (see Menton garden festival) and the acres of Orange groves and the famous Menton lemons. The local lemon crop is so important to the history and economy of the Menton, that they get there own festival celebration during February (see Menton Lemon festival).

Menton enjoys some very clean beaches and the local sea water is reputed to be the cleanest along the whole of the French Riviera on account of a state-of-the-art water purification system. The certainly the sea is too cold for swimming in from October through to mid-April (except for a few hardy souls). But from the end of April the beaches and the sea gets steadily busier with sun bathers and swimmer alike. During July and August the beaches and the sea get extremely busy and sometimes it is a struggle to find a suitable spot unless you know where to go (see Menton beach France for more information).

April is a lovely month to visit Menton. The weather is usually dry and sunny and the day time temperature in Menton averages 20oC. The evenings do get noticeably cooler and you will need a jumper or light jacket if you are walking about the town.

May weather in Menton France

During May the weather in Menton is starting to step up in temperature, with some days hitting as high as 27oC and an average monthly temperature in Menton of 22oC. May is also incredibly sunny in Menton, with up to 9 hours of sunshine being recorded. I think that May, June and September are the best months to visit Menton, France. The streets are less crowded, but the days are warm and it is easy to get a seat at the many excellent restaurants in the town (see Menton restaurants for more information).

June in Menton, France, is often a month of two halves. The beginning of the month, the temperature in Menton continues the path set during May, with an average day time temperature of 23oC. But come the middle of the month, the Menton temperatures noticeably step up to an average of 27oC. You can really feel that this is the start of the summer. Towards the end of June the sea temperature around the coast of Menton rises to around 21oC, which makes it slightly cool when you first get in, but after a few minutes it is very pleasant for swimming.

July is glorious to be in Menton, France. The average temperature in Menton is a wonderful 30oC, but it often doesn't feel quite as sweltering, on account of the cool summer breeze blowing in acros the Bay of Garavan. The evening temperature hovers around 19-20oC - still warm enough for dining out in shorts and summer dresses. Surprisingly, July in Menton is actually warmer and drier than August. July also enjoys the most hours of sunshine, with a daily average of 11 hours of sunshine. The sea temperatures regularly top 23oC - which is certainly warm enough for a dip. July is also the time of year when the Menton Tango festival is held. During the week of the festival you will find the local esplanades full of dancers dancing to the famous Argentinian rhythms.

The weather in August follows a similar pattern to June, just in reverse. The start of August, the temperatures in Menton continue to average around 29oC, but by the end of August the temperature has noticeably dropped off a few degrees to around 26oC. August is still very dry, with very few days when rain is recorded. What I would say about the weather in France during August is that you can get some noticeable spikes in temperature some years, when temperatures can top 37oC/100oF. It doesn't happen every year, but August is probably the most unpredictable month for weather when it comes to temperature.

I think that September is the best month to visit Menton, France. The town is less crowded and the weather is still beautiful. Average temperatures in Menton hover around 27oC and the evenings are still warm.

During September, Menton hosts an international Tango festival in the streets and halls in the town (see Menton Tango festival for more information).

The sea is still warm enough to swim in and there is usually very little rain (less than 5 days per month). If you would like to visit Menton, France, we have a number of excellent apartments in the town which rent all year around (see Menton apartments to rent). 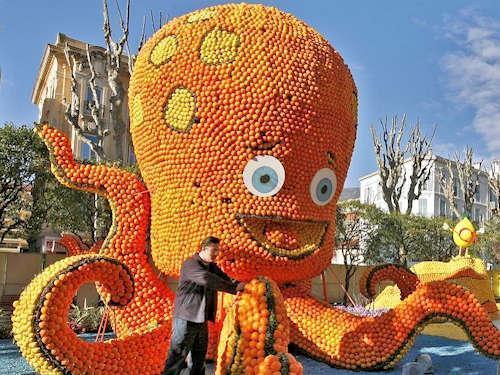 October is traditionally the wettest month in Menton, but what makes it enjoyable is the lovely Autumn days that follow. The locals often say that the Autumn and Winters on the South coast of France make the traffic and congestion in the summer all the more bearable. It is still certainly possible to get day time temperatures topping 26oC throughout October.

During November, the pattern of weather from October continues, with some rainy days interspersed with bright blue skies. Rain is usually recorded on 8 days during the month, but it is rare to get the heavy downpours that occur during October. The temperature in Menton during December is normally a cool but live-able 14oC, but the bright sun makes it feel warmer. January is the coldest month in Menton, with temperatures dropping to an average of 13oC during the day and as low as 4oC during the night (it is rare to get temperatures dropping below freezing on account of the proximity of the sea and the sheltered bay.

February is a popular time to visit Menton on account of the famous Menton Lemon Festival. The 2022 Menton Lemon festival is taking place between 12 and 27 February 2022. During February the day time temperatures average a pleasant 14oC - certainly warm enough to walk around in a light jacket or jumper. But the evenings are noticeably cooler.