There are 5 great beaches to visit in and around the coastal town of Menton in South France. Menton benefits from some of the cleanest waters on the French Riviera on account of a state of the art water purification system located in the bay. The Menton beaches are also scrupulously clean. Menton has a wide variety of beaches which stretch from Garavan, right on the Italian border along to Carnoles. You will find a mixture of both sandy and pebble beaches, as well as public and private beach clubs.

Menton has a local microclimate which is almost subtropical with high temperatures and the surrounding hills protect it from cold winds from the Alps. In the height of summer the humidity in Menton can creep up, but the sea breezes help to freshen the air. The microclimate has helped make Menton an important centre for growing citrus fruits (see Menton Lemon Festival) as well as help it cultivate some wonderful Mediterranean gardens (see Menton Mediterranean Garden Festival).

The beaches surrounding Menton, France, are primarily narrow strips of either sand or pebbles. The local council makes a great effort to enlarge the shoreline by 30 meters each year to accommodate the number of sunbathers that flock to this part of the French Riviera. Generally speaking, the beaches towards the Italian border are sandy and the beaches on the western side of Menton towards Monaco and Nice are quite rocky. Amongst the best Menton beaches on the western side are:

Plage de Fossan - a wide sweeping sandy beach which is great for kids. This is probably the pick of the western Menton beaches. The other benefit of Plage de Fossan is that it is a no smoking beach. Towards the far end of the beach there is also a small park and children's play area.

Plage du Casino - located close to the Menton Casino, this small rocky beach is very popular with the local residents of Menton. The beach gets its name from the nearby Casino Barriere, next to the Biovès gardens.

Plage du Borrigo - another popular beach with the local residents, Plage du Borrigo, is located on the western edge of Menton. The beach has good parking and is also equipped with showers at the back of the beach.

As you cross over the river in Menton, the beaches become noticeably more sandy (and more crowded). The beaches here stretch from the old port all the way around the Bay de Garavan. There are two public beaches (Sablettes and Rondelli), but the rest of this coast is given over to hotels and private beach clubs.

Plage Sablettes - is located right next to the port. This narrow beach gets very busy in the summer as it is the closest beach to the old town of Menton. The beach is popular with families on account of the warm shallow water. The backdrop of the beautifully coloured buildings of Menton makes this a special location. 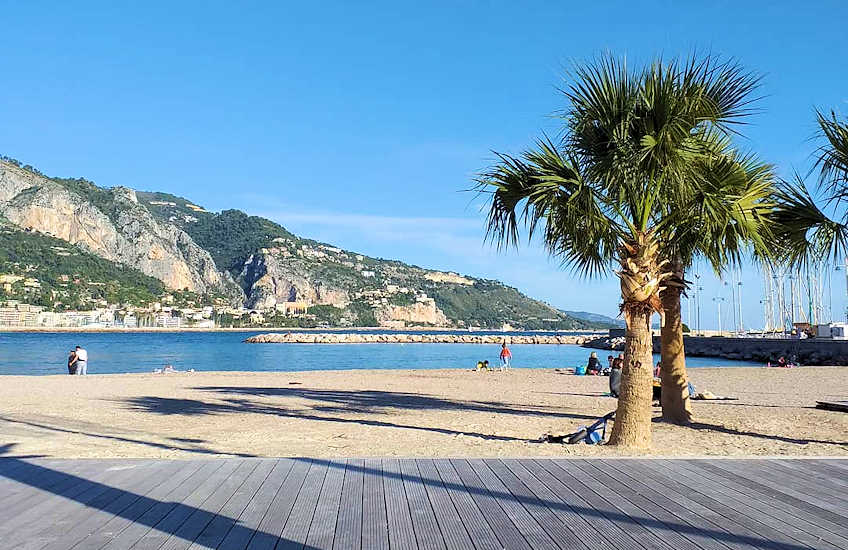 Where is Menton, France 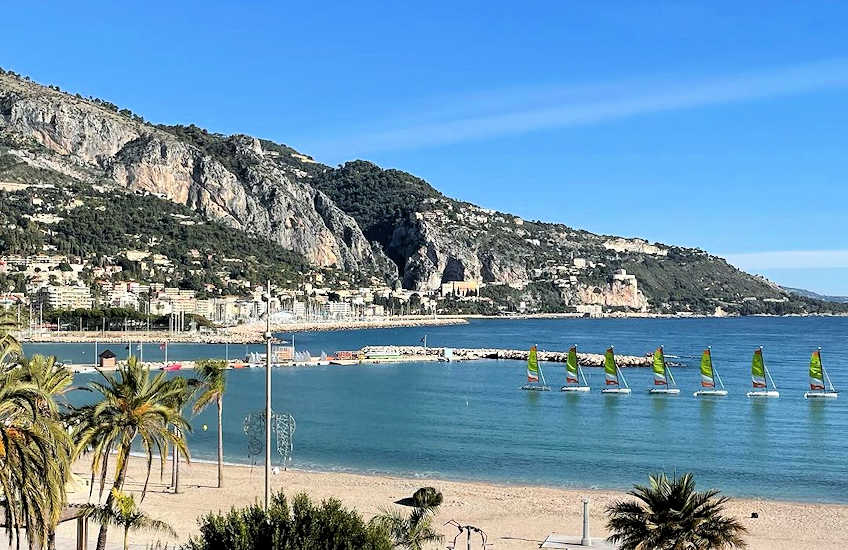 Menton is located in the far eastern corner of the French Riviera, right next to the Italian border on the Mediterranean coast.

There is a train station in Menton which is just a 10-minute walk from the beaches on the east of the town. The train service from Nice to Menton runs every hour.

If you want to get to the sandy beaches in Menton (close to Garavan beach) take the bus from outside the train station (Line #1) and exit at the Les Sablettes bus stop.

If you want to reach Menton by car, then either exit the A8 motorway at junction 59 and follow the D2566 down into Menton town centre; or the more scenic route is to drive along the coastal road (D6007) through Roquebrune-Cap-Martin.