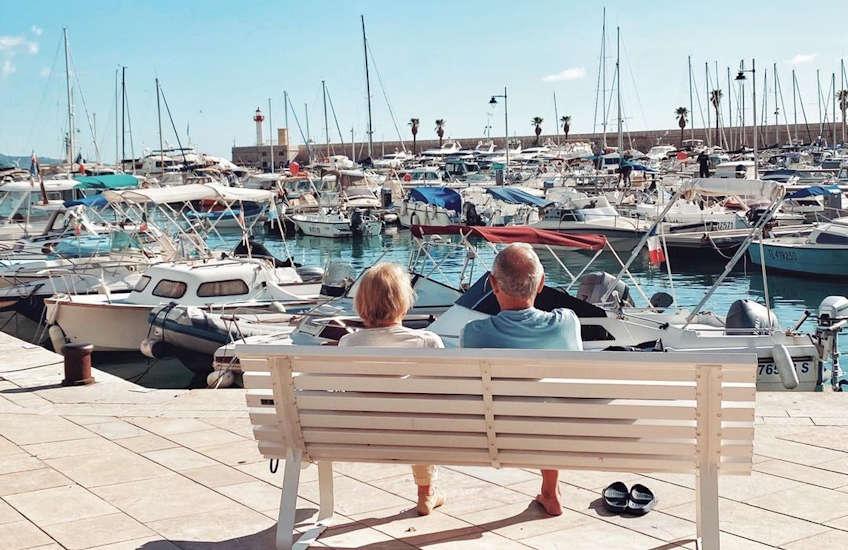 The weather in Frejus, South France, is a typical Mediterranean climate, with long hot summers and mild winters. What makes Frejus distinct however, is the amount of clear sunny days the town enjoys. Typically, Frejus enjoys over 2,690 hours of sunshine a year, making Frejus the sunniest places in France.

With the lovely beaches surrounding Frejus, such as Frejus Plage, Plage de la Tortue at Saint-Raphael and Cherry Beach in nearby Sainte-Maxime; you can see why Frejus is such a popular French Riviera resort.

The area surrounding Frejus has been populated since before the Romans, with a settlement first being founded here by the Phoenicians. The Romans further developed the town by building an amphitheatre, the forum and a popular market place and cultivating the surrounding lands with olive trees, vines and citrus fruits.

The warm climate in Frejus helped the town to prosper up until around the 10th century when the port began prone to silt. During the early 19th Century the town became developed as an early tourist destination, rivalling the nearby resort of Hyeres.

Following the Second World War, the warm sunny climate in Frejus helped tourism to take off dramatically and the town expanded rapidly to encompass the seaside village of Saint Raphael. 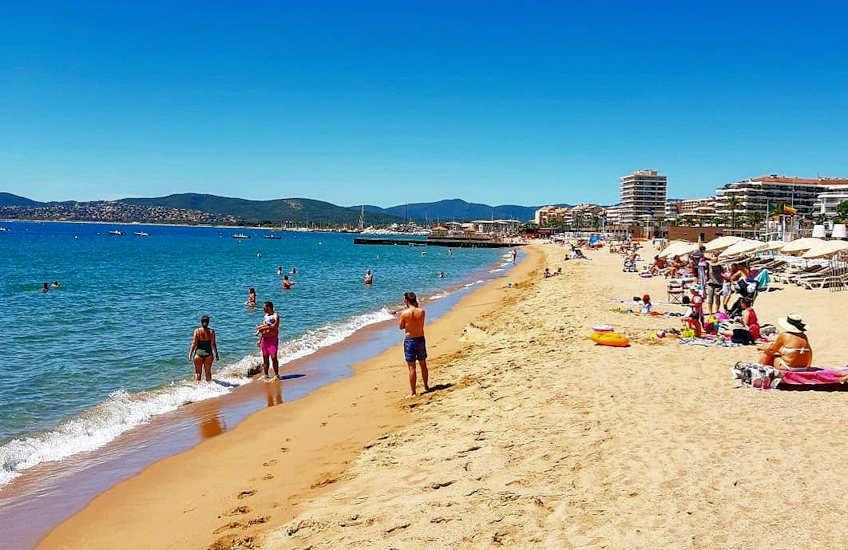 Personally speaking, I think June and September are the best times to visit Frejus, France. The weather is still warm and you can still enjoy long sunny days. Rainfall is still very rare and you are unlikely to need even a jumper during the evenings. During July and especially August, Frejus becomes very busy as holidaymakers from France and Northern Europe descend on the town. June and September are not so busy and you can still enjoy the numerous attractions and water sports facilities.

Weather in Frejus France in May

During May, the heat switch in Frejus is suddenly turned on. You go from days in late April of around 20°C/68F, up to the high 20's in May in Frejus. The average temperature for May in Frejus is 23°C/73F, but it can often feel warmer in the sunshine

Weather in Frejus in June 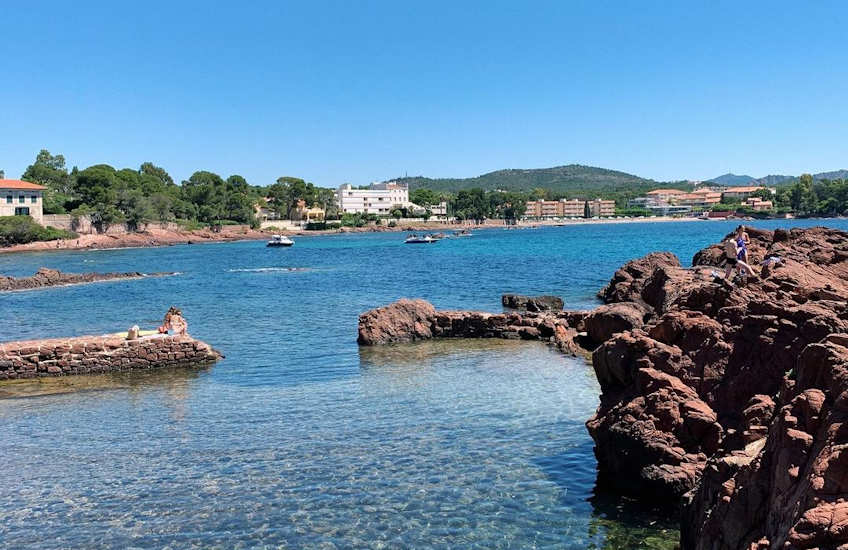 The weather in Frejus in June is glorious. On average, the temperature in Frejus in June hits the high 20's with an average monthly high of 27.2°C/81F. It is certainly not unusual to get days topping 30°C/86F. during June in Frejus. The month of June is very dry, with only 4 days a month on average recording any rain. Along with September, June is perhaps the best month for visiting Frejus.

July is the driest month in Frejus, France, with rain only falling on 2 days per month on average. The weather in Frejus in July is lovely and hot with long sunny days. July in Frejus is also the hottest month of the year with average temperatures around 31°C/88F.

Towards the middle and end of July, you can get days topping 35°C/95F and most days enjoy clear un-interrupted sunshine and a nice gentle breeze coming in off the sea. 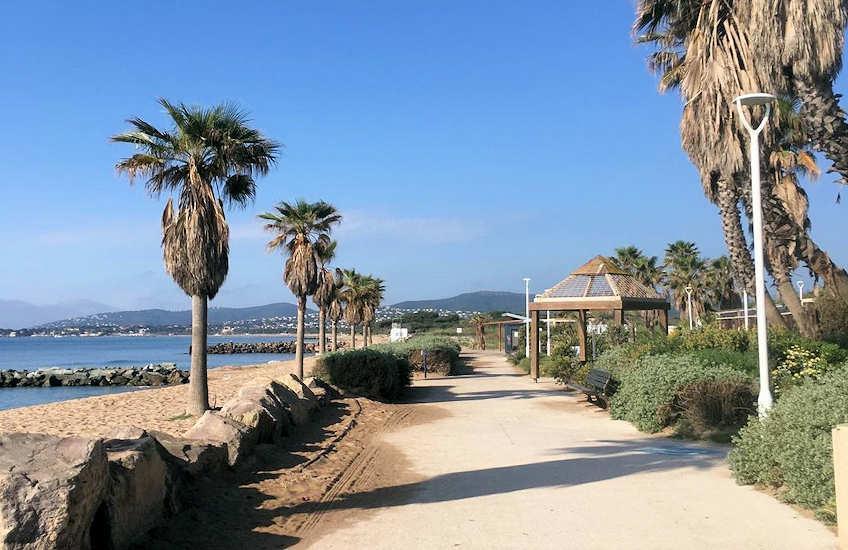 August is when the French holidaymakers arrive in Frejus, France. As to be expected, they come for the warm climate and uninterrupted sunshine. With temperatures still topping 33°C and an average monthly temperature of 31°C, you can see why they come in their thousands to enjoy the beaches. Like July, you will not get much rain, but when it does rain, you can get some spectacular downpours.

Weather in Frejus in September

The weather in Frejus in September is warm, dry and sunny. The average day temperature is still around a very healthy 26.5°C/78F and the night time low temperatures dip down to a very pleasant 13.3°C. September enjoys around 8 hours of sunshine per day and it only normally rains during 4 days during the month.

The weather in Frejus in October and November is traditionally the wettest part of the year with some spectacular storms blowing in off the Mediterranean sea and captured by the mountains behind. The weather in October in Frejus is still relatively warm (around 21.2°C/69F) but you do get more rain showers and normally there is a 30% chance of rain.

During November in Frejus the temperatures drop down noticeably, with an average monthly temperature of 16°C/61F. This is still warm in comparison to most places, but you can really feel the drop in temperature if you are living here all year around

Frejus France weather in the winter

It is a strange thing, but a lot of people visit Frejus for the winters. Whilst the temperature is cooler, it is still mild compared to most of Europe and you also benefit from plenty of clear blue skies during December through to February. January is the coldest month in Frejus, France, with average monthly temperatures just nudging 13°C/55F. But it is the night time when you notice the temperature drop the most, with some nights even dropping to below 2°C/35F.

During March and April you can get some good hot, sunny days in Frejus. With average highs around 18°C/65F and around 7 hours of sunshine per day, it is very pleasant indeed. During the evening you are going to need to wear a jumper or light jacket and you will also need to have a shower coat to hand for the occasional showers (on average it rains 6 days per month during March and April.