Things to do in France with kids: Canoeing South France

Our 3 boys were brought up in the South of France and I think even now they would say that their favourite days out would be to find a beautiful river, have a picnic, hire some canoes and then spend the rest of the afternoon jumping off some dangerous cliffs into the water. These 5 spots for canoeing certainly have some great memories for our family - certainly more memorable than lying on a crowded beach.

So if you're looking for activities for your kids or grandchildren and you want an inexpensive alternative to the beach or the water parks in the South of France, then give this a try. It is a cheap day out - a couple of baguettes, ham, cheese and pate; a bottle of water and spare change for the canoes and ice creams afterwards. 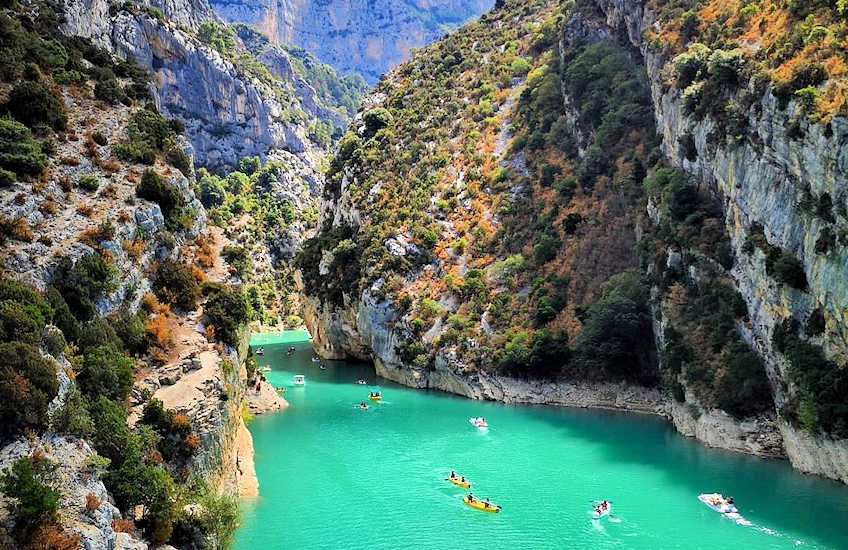 The Gorge du Verdon is a massive canyon with a river running through it. The river is a beautiful turquoise blue (on account of the white limestone rocks) and there is plenty of shade from the surrounding cliffs. It is often referred to as France's equivalent to the Grand Canyon (but I think that this is stretching it a bit). The Verdon Gorge is about 25 kilometres long and up to 700 metres deep. The Gorge du Verdon is located in the very north of the Var department, approximately 40kms north-west of Draguignan and 1.5 hours west of Cannes and Nice.

We normally hire canoes from a place near the village of Montmeyan. The canoe hire shop is open from 10.00 until 18.30. It costs around €50 for around 2 hours (which to be honest is about long enough). Even if you take a picnic and stop off half way along, by the end of 2 hours in a kayak your back and shoulders are pretty sore.

The last time we went to the Gorge du Verdon we were with some friends from Biot and they took us to the Lac de Sainte-Croix, where we rented 3 canoes and then paddled our way into the gorge

The water is very clean and surprisingly quite warm. It seemed that the key aim of our boys was not to canoe too much, but just enough to find the nearest big rocks on the side of the Gorge and then diving in and out of the water for about 2 hours. Still, it saved me the pain of canoeing for too long!

I also found this great blog about wild swimming in the Gorge du Verdon (Wild swimming Provence) which has some great photos of the river and the Gorge.

The Pont du Gard is a famous Roman aqueduct that was constructed around 50AD. At its highest point it stands at 50m above the River Gardon.

The Pont du Gard is located north-west of Nimes, close to the lovely town of Uzes. The Roman's built the aqueduct to bring fresh water from Uzes to the centre of the garrison town of Nimes (some 50kms in distance). The Pont du Gard was constructed to take the water over the main obstacle in the way - the Gardon river valley.

The thing that amazes me about the Pont du Gard is that the bridge is constructed solely from stone, with no mortar holding the stones together. The stones were all carved to fit perfectly with one another. But these stones are enormous - I have no idea how on earth the Romans lifted them up with no cranes or even pulleys. The other thing that is quite incredible is that over the whole length of the bridge (some 275m), the gradient falls by precisely 2.5cms (which is something like a 1 in 20,000). I mean how on earth did they manage that level of precision without theodolites or laser instruments?

Just under this famous Roman aqueduct there is a rocky beach and nice cool river. Canoeing under the Pont du Gard is a great way to see the bridge. There is also a good choice of rocks on either side of the river where you can clamber up and jump into the water below. There is plenty of parking in the Visitor centre car park (on the Northern side of the river) or you can take your luck along the road on the Southern side of the river. Canoes can be hired further up the Gardon river. In fact you have a choice of 2 hire companies (one of whom arranges a pick up point just south of the Pont du Gard and take you up to the starting point upstream).

The canoe hire costs are Adults: €23, Teenagers: €19 and Children under 12: €12. There is no collection point, you simply have to paddle downstream to the Pont du Gard and then paddle back up to the base 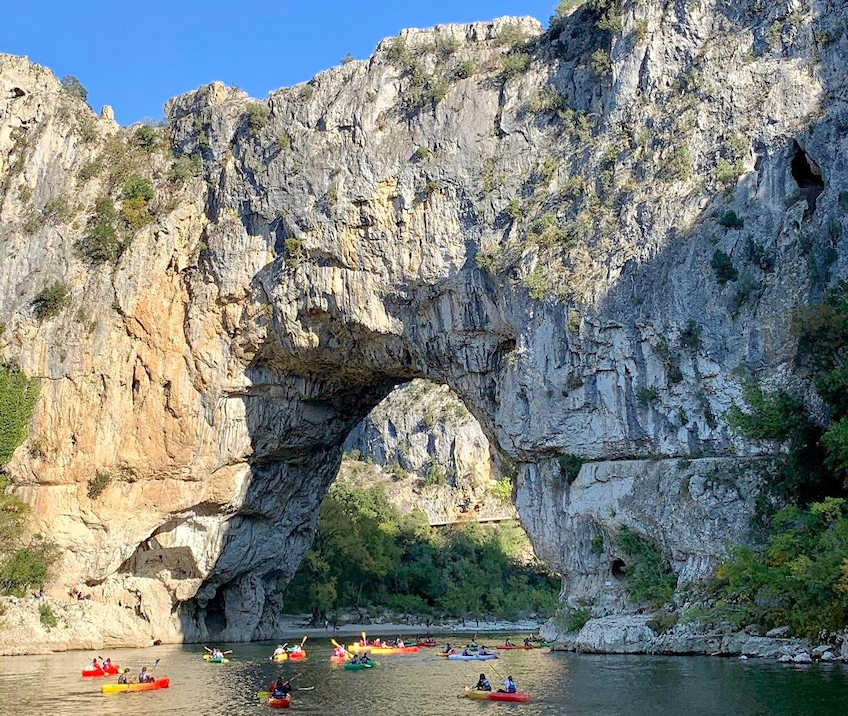 The Vallon Pont d'Arc on the Ardeche river is an instantly recognizable landmark in Southern France. This 30m high rocky arch has been steadily eroded by the river which flows through it. The Pont d'Arc is an excellent base for canoeing, swimming and a river-side picnic.

But be careful, the river is quite fast flowing and full of rocks. It is not white water rafting style rapids, but it is not far off. It is certainly not a gentle paddle along the river.

About 4 summers ago, we drove to the Pont d'Arc, but unfortunately/luckily we arrived too late to hire a canoe here with our boys. The boys all kicked-off because we had just driven 2 hours and they wanted to canoe. So to placate them we took them further down the river to where the Arch is located. That was when we saw a scene from Armageddon. All you could see in the water was lost paddles, upturned canoes, the odd person floating down with their life vests on. Just before the Arc, there is a rocky section of the river where the falls steeply and basically the serne paddle up to this point doesn't quite prepare you for all the twists and turns and boulders. Still the adrenaline junkies will love it. Thankfully our boys decided we'd had a lucky escape and the canoeing wasn't mentioned again that afternoon.

4. Things to do in France with kids: Canoeing South France - Pont du Diable 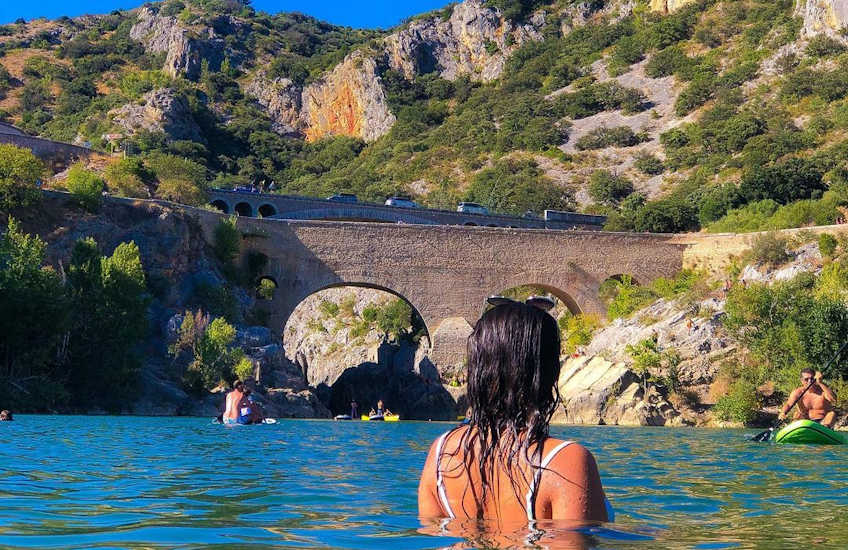 This is one of my favourite spots in South France. Just below the lovely village of St Guilhem le Desert, the river Herault has been partially dammed to form a small swimming lake. This was another life-saver for us during our first year of renting in France. When it is 40°C, then the fresh water of Herault River is a welcome relief. We still go up to the Pont du Diable with the boys, even now they are all grown up. We have some very fond memories of the place.

The bridge dates back over 900 years and originally was built by monks from the nearby monasteries at Aniane and St Guilhem le Desert.

From the banks of the lake you can take out a canoe and paddle up the ravine under the Pont du Diable. You just need to be careful to avoid the crazy teenagers hurling themselves 30 foot down off the small road bridge into the river below.

In the last few years a lot of money has been spent developing the surrounding area, including providing a large car park, a lovely visitor centre (where you can grab a cool beer and ice cream) and a life guard look out post.

We like to get to the lake for mid-afternoon and then head up to St Guilhem le Desert around 8.00pm for a Pizza in the square above the village. There tends to be less tourists around in the evening and it is nice and cool to stroll around the old streets - it really is an amazing spot.

The Pont du Diable is located 35kms north-west of Montpellier on the D27 between the villages of Aniane and St Guilhem le Desert. The nearest landmark is the Grotte de Clamouse underground cave centre.

5. South France with kids: canoeing on the River Orb

The River Orb is located in the Herault department and flows over 145kms from the Haut Languedoc National Park in the West to the Mediterranean sea in the East. The river passes through Beziers and joins the Med at Valras-Plage.

Our favourite place along the River Orb is at Roquebrun, one of the prettiest villages in Languedoc. Perched on the edge of the river Orb and framed by a giant rocky spur behind, Roquebrun is a great place to spend an afternoon. The river is slow-flowing and there is a little weir that you can slide down (our kids normally go down head first, but there again they are mad little buggers!!).

Another nice spot is next to the lovely village of Cessenon-sur-Orb, which has a big iron bridge across the river.

The section of the river between Roqebrun and the small village of Reals is the most dramatic section for canoeing. Here you really do get a taste for the rapids, with lots of bendy sections of the river as it passes through some rocky cliffs. At Réals, you will also find some nice rockpools where you can sit and bathe in some super warm water

Canoe Roquebrun arranges a pick up service from downstream on the River Orb. The company is located at: