Aqualand operates 3 water parks on the Cote d'Azur in South France. There is the Aqua Park in Frejus,  Aqualand St Cyr sur Mer, located in between Marseille and Toulon and the Aqualand park in Sainte-Maxime. We have visited the Frejus aqualand water park and this seems to be the biggest of the three water parks, with more slides and it is situated in a bigger park.

Aqualand is generally regarded as running the best water parks in France, although the new Aquasplash water park near Nice has a good reputation.

Our favourite rides at the Aqualand waterpark in Frejus were the King Cobra - absolutely terrifying, a pitch black ride that seems to last for ever and takes you spinning and turning down; the Niagra - a straight long chute that propels you down in 2 seconds; and the Black hole - a massive flume. But all of these slides do attract massive queues. There is a clutch of good slides which don't get too busy (Anaconda, Colour Splash and Blue Mountain). The wave machine pool is very good and the toddler pools are safe and entertaining. There was not too much to go on if you were under 1.10m. If you do have small children, you might be better visiting Speedwater near Aix-en-Provence, as I doubt they will get their money's worth here (see below)

Despite all the queueing we had a good day out. It is not something I want to do every day, but it is good fun nonetheless. It certainly brings out the big kid in you. We visited the Aqualand park in Frejus. There is also another Aqualand waterpark in Sainte-Maxime just up the road. I have no idea which is the better park (Aqualand seem to have similar rides at their parks), but when we looked it up on the internet, Frejus seemed to have more rides and looked a bigger park. There is also a new water park near Nice (Aquasplash Waterpark South France), which has a good reputation, but we have not visited it yet. 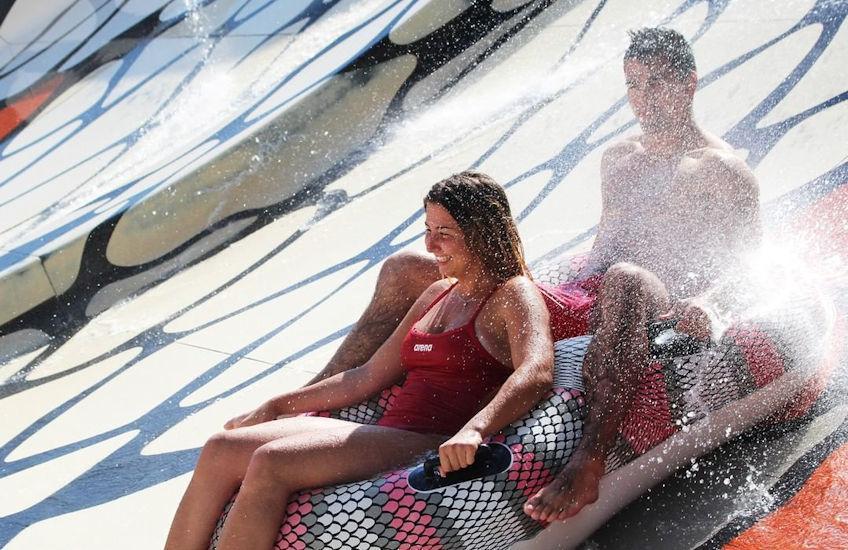 In addition to the Frejus Aqualand water park, there is also another Aqualand in Sainte-Maxime just up the road. I have no idea which is the better park (Aqualand seem to have similar rides at their parks), but when we looked it up on the internet, Frejus seemed to have more rides and looked a bigger park.

I would also imagine that the Sainte-Maxime water park will get busier than the one in Frejus on account of all the camp sites and holiday resorts in Sainte-Maxime.

The Sainte-Maxime Aqualand water park does provide some good family tickets (€83 for 2 adults and 2 kids). The water park is located towards the northern edge of Sainte-Maxime and provides some nice views of the hills and down to the coast. The park opens from the 24 June until the 30 August each year.

The key attractions at Aqualand Saint-Cyr-sur-Mer include The Wave, a giant U-shaped slide; the Flying Boat, which is the longest toboggan water slide in Europe and the Boomerang, which is a smaller combined version of the Wave and the Fying Boat - a water toboggan propels you down and then exits you onto a U-shaped slide.

You can get more information about the opening hours and ticket prices for all of the Aqualand water parks in South of France from their website (which is in French and English) Aqualand South of France. The best advice I can give you is to visit the park either at the start or end of the season (late June or early September) or if not, you certainly need to arrive early to get a couple of sun loungers during the high season. I would also definitely recommend booking online, rather than queueing to pay on the day.