10 Best South France restaurants to eat at in 2021

There are 2 standout restaurants in Southern France: the Mirazur in Menton and the Auberge de Vieux Puits in the Corbieres. But if you are visiting the South of France in 2021, there are also plenty of excellent restaurants to eat at. Here we pick out the 10 best South Restaurants for you to enjoy.

Best South of France restaurants to visit in 2021

The Mirazur in Menton and the Auberge de Vieux Puits in the Corbieres are two restaurants which stand as bookends - both physically and figuratively - to all the other restaurants in South France. The South France and Provence has such a diverse range of good food and seasonal ingredients that you would think that the region would be awash with great restaurants. But with all the good Chefs heading off to Paris and London, you often have to search hard to find a good place to eat. Here is our selection of the best South France restaurants we have eaten at recently.

Here is our selection of the 10 best South France restaurants for you to eat at during your stay in the South of France during 2021.

The Mirazur restaurant has just been named in the Number 1 best restaurant in the World. The Mirazur is run by the celebrated chef Italian-Argentinian chef, Mauro Colagreco. Since the Mirazur opened in 2006 it has gained 2 Michelin stars and Colagreco has been voted Chef of the Year. The restaurant is situated on the hill side above Menton and from the large terrace you can enjoy excellent panoramic views over the Bay of Garavan.

The Mirazur restaurant grows all its own vegetables and herbs in the gardens surrounding the restaurant. Legend has it that Chef Colagreco uses over 250 different types of herbs in his menu recipes. Mauro Colagreco's signature dish is his Langoustines in a Dashi Broth, as well his Gamberoni di San Remo, which uses the fresh prawns reared on the nearby Italian Ligurian coast.

You will find the Mirazur restaurant at 30 avenue Aristide Briand, Menton, France. For reservations either call (+33 4 92 41 86 86) or email a reservation to Mirazur Menton.

If you love fabulous food and wine, then there can be no finer restaurant in the South of France than the Auberge du Vieux Puits. This Michelin star restaurant is run by the celebrated French chef, Gilles Goujon; and it has just received its 3rd Michelin star award.

The Auberge du Vieux Puits is located in the Corbieres area of the Languedoc region. It may be a fair way to travel, but the definition of 3 Michelin stars is that it is a restaurant

I can not recommend this restaurant highly enough. The food, the service, the wine, the cheese were all excellent. We visited this restaurant a couple of years ago with some French friends and we still talk about the experience to this day. See our article on Auberge du Vieux Puits for more details.

The beautiful island of Porquerolles is located just off the coast of the French Riviera, close to Hyeres and Toulon. The island is a national park and conservation area, where cars and further development are both prohibited. To me Porquerolles reminds me a bit of Martha's Vineyard, with wild windswept beaches, a lack of cars and people just chilling out. The best way of reaching Porquerolles is by boat from Toulon or from Hyeres (the TLV-TVM boat from La Tour Fondue).

The Olivier restaurant at the Le Mas du Langoustier hotel complex, has a well-earned reputation for some the best Provençal and Mediterranean cuisine on the French Riviera. The menus at this Michelin star restaurant start from €65 - basically if you can afford to stay at the Mas du Langoustier, then you are not going to worry about the cost of the restaurant. But given its privileged location and the high quality of its food, then that is a price worth paying for a truly memorable experience.

Jacques Chibois is fiercely proud of the French culinary heritage and especially of the local dishes of Provence. He has written two best-selling cook books: "La Provence comme on l’aime" and "Saveurs et parfums de l’huile d’Olive" which contain many of his celebrated dishes such as pan-fried foie gras escalopes with artichoke cream and roast veal fillet with truffle potatoes.

" . . .his flavourful, aromatic and light cuisine lifts the spirits and delights in the heart of Provence . . .".

The Pescalune restaurant situated in the lovely Provencal town of Bargemon, was opened in 2008 and has built an enviable reputation as one of the best small restaurants in Provence. Situated in a former florist shop, the inside of the restaurant measures just 4m x 10m, with all the eating located outside on the terrace in front of the restaurant and overlooking the small square and fountain.

The owner, head chef and Maitre D' is Viginie Martinetti. Martinetti, is an award winning young chef, thriving in the male-dominated restaurant world. In 2013, she won the final of the coveted French Top Chef TV programme (equivalent to Master Chef).

The Pescalune restaurant recently achieved its first inclusion in the 2016 Michelin guide. But at this moment of triumph for Martinetti, tragedy struck as she fractured her arm in a freak accident.

La Colombe d’Or restaurant was opened by Paul Roux and his wife Titine in 1920 as a fairly humble café bar. What made La Colombe d’Or distinct was Paul Roux's passion for art. He cultivated friendships with many local articists, many of whom contributed art works to be displayed in the restaurant (including a piece by Picasso).

La Colombe d'Or restaurant in St Paul de Vence continues to be the coolest place to hang out on the French Riviera. The Roux family continues to run the Colombe d’Or hotel. The Hotel is located on the edge of St-Paul de Vence and prices for the rooms varies between €250 to €430 (depending on the season and size of the room).

The food at the Colombe d'Or is traditional French cuisine, with a Mediterranean feel. The main restaurant seats approximately seventy people, with space for a further thirty people in a private dining room. During the summer the beautiful garden terrace can accommodate one hundred diners.

Les Palmiers restaurant in Pezenas, South France is the best mid-priced restaurant in the centre of this historic Southern France town. The restaurant is set in a great location in an open-air courtyard in the heart of the old streets of Pezenas.

The beautiful old town of Pezenas is located in the heart of the Languedoc region, surrounded by vineyards and close to the Mediterranean sea. At Les Palmiers, you literally dine out under the stars, beneath 3 huge cream canopies strung in between the two adjoining properties.

The renowned gourmet restaurant of Auberge de La Croisade is situated by the side of the Canal du Midi in the village of La Croisade. The Auberge offers a very good value leisurely lunch menu and the setting is top class with views across the valley of the Aude to the Pyrenees. The menu is surprisingly well priced and uses only fresh local produce. The wine list features many local wines from the Corbières, St Chinian and the Minervois.

The head chef was trained at the Hôtel Crillon in Paris and at the Dorchester and Claridges in London. The Auberge is located in a converted Canal workers' building and was opened in 1993. Youcan either sit in the beautifully restored dining room or in the conservatory, overlooking the Canal. Druing the summer there is a shady terrace with fantastic views.

La Croisade is a small village situated between the villages of Cruzy and Ouveillan. Auberge de La Croisade is located 17 km north of Narbonne, 23 km west of Béziers and 50 km east of Carcassonne. It is situated ninety minutes by boat along the Canal du Midi from Capestang or Le Somail, and can be reached on foot or by bicycle along the towpath from Capestang or Argellersd.

The Auberge is open all year, apart from ten days in late November and three weeks in February. The restaurant is very popular with locals and you are advised to book in advance. The restaurant is open for lunch and dinner from Thursday to Sunday inclusive and closed ou Tuesdays. 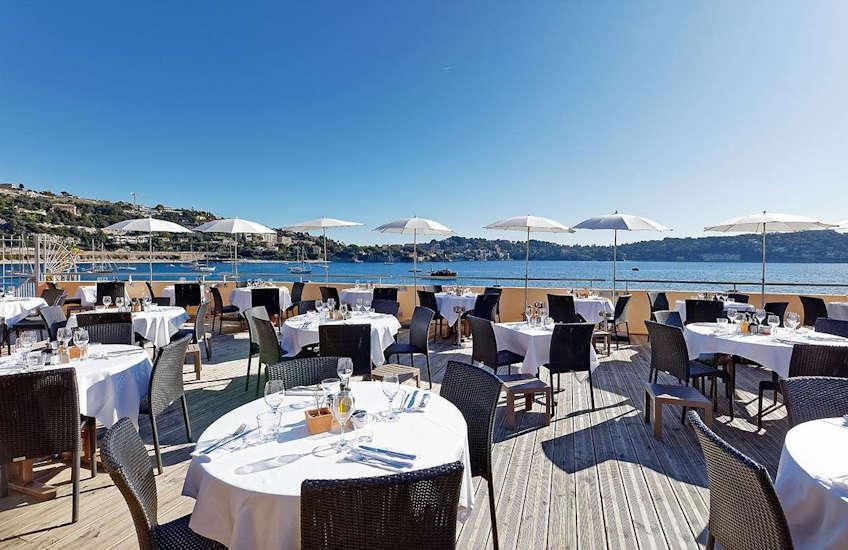 I have included La Mayassa beach restaurant in the list of Best South France restaurants because of its superb seaside location in Villefranche-sur-Mer.

Villefranche is located just next to Nice in a sweeping bay. With fine views over the Mediterranean sea, you are not going to find a better location for lunch or an evening meal. Le Mayssa restaurant is noted for its seafood cooked in French Mediterranean style. The seared tuna and the carpaccio of scallops are delicious.

La Villa Madie is a 2 Michelin star French restaurant situated in a modern building in Cassis, with a panoramic views across the sea. The restaurant is run by the dynamic young couple of Marielle & Dimitri Droisneau. Marielle is in charge of the front of house and Dimitri is the award winning chef. La Villa Madie is located on the eastern side of Cassis, just underneath the enormous cliffs that frame the town. From the long bay windows inside the restaurant, you can enjoy fabulous views all year round and the large terrace is the perfect place to eat during the summer months, with the sea just below and the dramatic cliffs of Cap Canaille as your backdrop.

The cooking at La Villa Madie restaurant in Cassis is high-end gourmet food. The menus range from a 4 course menu at €75 and an 8 course signature menu at €215. Dimitri Droisneau's signature dishes include Grilled Mediterranean Royal Lobster with a Saffron Broth and Rabbit and Palamos Prawns with a Provencal sauce.

The La Villa Madie restaurant Cassis is open from Wednesday to Saturday, for lunch and dinner. Please note that there is a formal dress code at the restaurant, for men this means no shorts or sandals. Bookings for lunch are taken for between 12.00 to 13.15. Evening reservations are taken from 19.00 to 21.15.