The 3 Michelin star restaurant of Mirazur in Menton, South France, is officially the World's Best restaurant. Run by the charismatic Italian-Argentinian chef, Mauro Colagreco, the Mirazur restaurant is located high above Menton, France; and provides both amazing views and equally-amazing food.

We are so lucky in the South of France to have two of the World's truly outstanding restaurants. The other restaurant is of course Gilles Gujon's 3 Michelin star restaurant, Auberge de Vieux Puits in the Corbieres hills. I have been lucky enough to visit the Auberge, but I am still saving up to visit the Mirazur in Menton.

In 2019, well before the global Covid pandemic shuttered many restaurants, Mauro Colagreco's Mirazur restaurant in Menton France was voted the Number one restaurant in the World by the influential trade magazine, The World's 50 Best Restaurants. This is the first time that a French restaurant has won this coveted title. The magazine postponed its 2020 rankings until 2021, so it will be interesting to see if the Mirazur retains its top spot.

What made the Mirazur so special according to the judge's panel, was its combination of its location on the French Riviera and the use of local vegetables produced in the restaurant's garden and the local citrus fruits for which Menton is known. There is also a fair degree of technical skill and invention.

". . . with unrivalled views of the French Riviera, a cascading vegetable garden and a team of outrageously talented cooks and front-of-house staff, all combine to make Mirazur the ultimate restaurant experience. Mauro Colagreco’s unique cuisine is inspired by the sea, the mountains and the restaurant’s own gardens, including Menton’s emblematic citrus fruits . . ."

The Mirazur was opened in 2006 by Colagreco. This Italian-Argentinian chef trained in La Rochelle, France, before moving onto working for 3 of the most celebrated Michelin Chefs: Alain Passard, Alain Ducasse and Guy Martin in Paris. The Mirazur Menton gained its first Michelin star in 2007, just a year after opening. In 2008, the Mirazur restaurant first entered the list of the 50 World's best restaurants, where it has remained ever since.

What is perhaps most surprising, is that the Mirazur only finally gained its coveted 3 Michelin stars in 2019.  Not only has the Mirazur proved itself to be the best restaurant in the South of France, it is now clearly the best Michelin restaurant in France.

Mauro Colagreco grew up in Argentina and is surprisingly young for such a celebrated Chef (currently 44 years old). After training in Argentina and France, he then proceeded to work at some of the most famous restaurants in France:  Arpège 3 (with Alain Passard), the Hotel Plazza Athénée (with Alain Ducasse) and the Grand Véfour (with Guy Martin).

The Chef is renowned for combining bold flavours and his presentation of the dishes is second to none. Using local ingredients (both Italian and French) and vegetables hand-grown in the kitchen garden; the Mirazur menu draws heavily on locally reared poultry and meat, as well as fish and seafood harvested in the local waters.

I see a lot of parallels between the work of Mauro Colagreco and Gilles Goujan from the Auberge de Vieux Puits. Both draw heavily on hand-grown vegetables, herbs and flowers and both use novel cooking techniques to accentuate the natural ingredients (rather than just trying to be novel).

In addition to the Mirazur, Colagreco also runs the Grand Coeur restaurant in Paris and has a number restaurants in Argentina (under the meat-focused brand of Carne). He has recently opened Grill 58 in Macao and Florie’s in Palm Beach, USA. Further restaurants are planned for opening in both Bangkok and Beijing.

Mauro Colagreco's signature dish is the Langoustine in Dashi Broth, closely followed by his Gamberoni di San Remo, which uses the fresh prawns reared on the Italian Ligurian coast. The judges for the 50 World's Best Restaurants identified Colagreco's Beetroot and osietre caviar as the standout dish on the menu.

During the forced closure of the Mirazur in 2020 due to the Covid-19 pandemic, Colagreco created a whole new menu for the Mirazur to be launched in 2021. The 'Lunar Menu', is inspired by the cycle of nature and is divided into four offerings (root, leaf, flower and fruit). The stand-out dish is the delicate rose built with San Remo prawns with a combination of cucumber and nasturtium.

The Mirazur restaurant is located in a 1950's art deco inspired building, with a lovely dining room providing panoramic views over the bay of Garavan towards Menton. The restaurant is laid out over 3 storeys and surrounding the restaurant is the large kitchen garden where Colagreco grows the vegetables, herbs, avocados and citrus fruits (for which Menton is famous for). 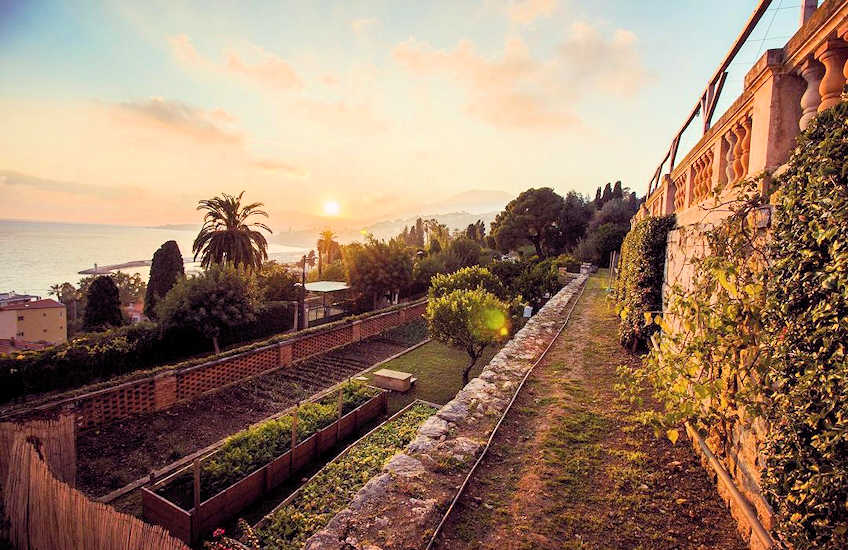 You will find the Mirazur restaurant at 30 avenue Aristide Briand, Menton, France. For reservations either call (+33 4 92 41 86 86) or email a reservation to Mirazur Menton.