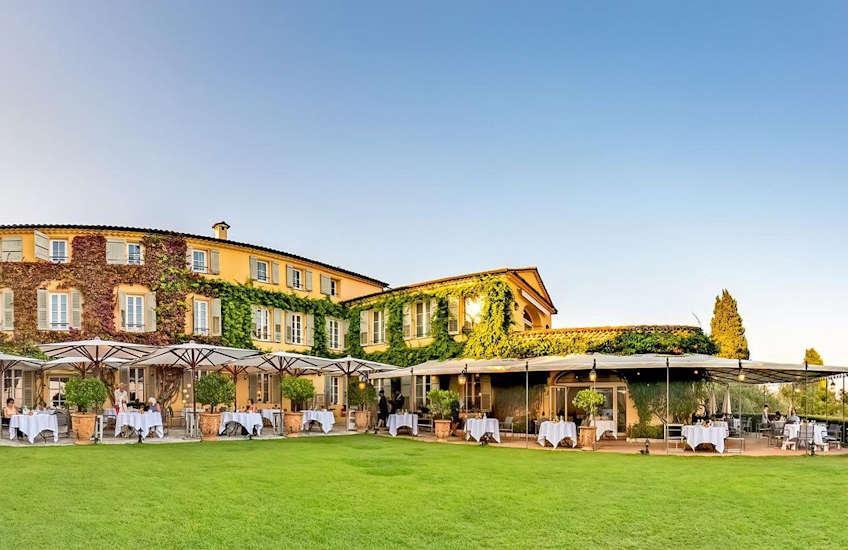 La Bastide St Antoine restaurant is a member of the Les Grandes Tables du Monde association, which covers 170 of the World's top restaurants across 24 countries. Jacques Chibois is fiercely proud of the French culinary heritage and especially of the local dishes of Provence. He has written two best-selling cook books: "La Provence comme on l’aime" and "Saveurs et parfums de l’huile d’Olive" which contain many of his celebrated dishes such as pan-fried foie gras escalopes with artichoke cream and roast veal fillet with truffle potatoes.

The celebrated French Chef Raymond Blanc has noted that

". . . Jaques Chibois makes some great food, they do a wonderful starter of oysters, caviar and smoked scallops and a superb lobster bouillabaisse with olives . . .". 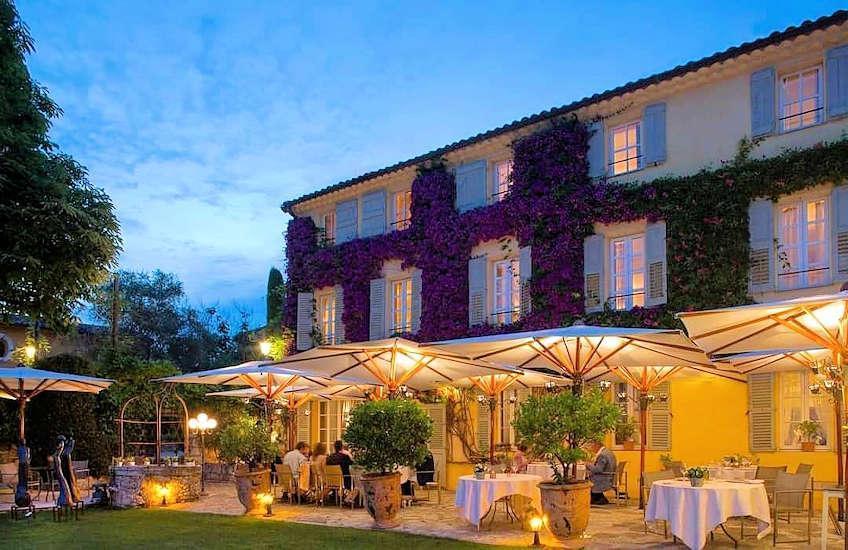 La Bastide St Antoine restaurant has an incredible wine list with over 1,600 different wines from Provence and vintages from other wine regions in France. His Head Sommelier was a recipient of the Gault et Millau gold award in 2013 and the Philippe Faure-Brac award in 2014. La Bastide St Antoine also provides wine tasting sessions which are delivered by its French, English and Japanese-speaking sommeliers. 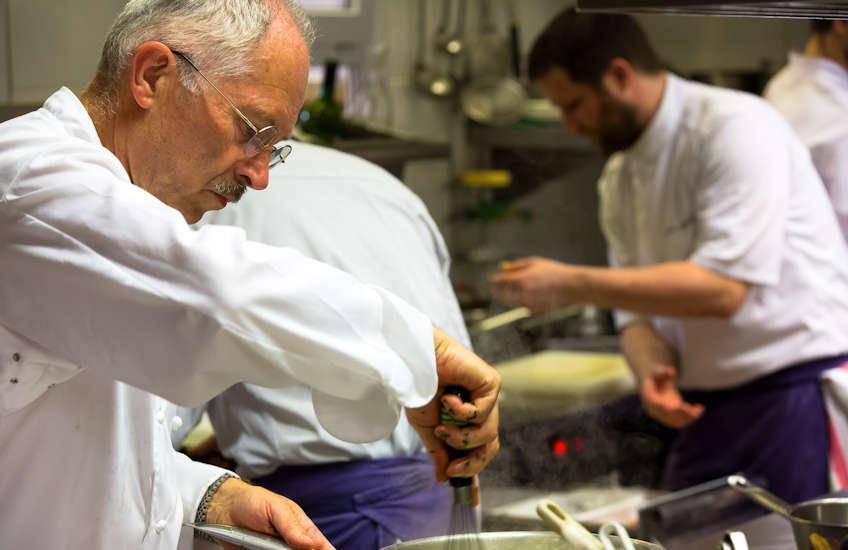 Jacques Chibois [Photo courtesy of www.jacques-chibois.com]Jacques Chibois was born in central France and he was raised near the town of Limoges. His parents ran a flour mill and Chambre d'hote. His mother was an excellent cook and he accompanied her to local markets and nearby farmers to purchase produce for her evening meals at the B&B.

Originally, Chibois entered the farming industry but he soon changed track and with the help of his mother he obtained an apprenticeship at a Michelin starred restaurant near Limoges and then moved on to work in the kitchens of some extremely talented Michelin chefs, including Michel Guerard, Jean Delaveyne, Roger Vergé and Louis Outhier.

In the early '80s Chibois became the head chef of the 2 Michelin star Grey d’Albion restaurant in Cannes and during his stay here he was awarded the covetted Chef of the Year title. In 1996 Jacques Chibois opened La Bastide St Antoine in a large Provençal country house situated in an ancient olive grove.

In 1997, the Chibois obtained 2 Michelin stars for La Bastide Saint Antoine restaurant and the Michelin judges noted that

" . . .his flavourful, aromatic and light cuisine lifts the spirits and delights in the heart of Provence . . .".

Jacques Chibois was also the proud recipient of the Chevalier de l’Ordre du Mérite et des Arts et des Lettres, a French honour which is bestowed upon individuals who excel in the field of art, writing, science and of course food. 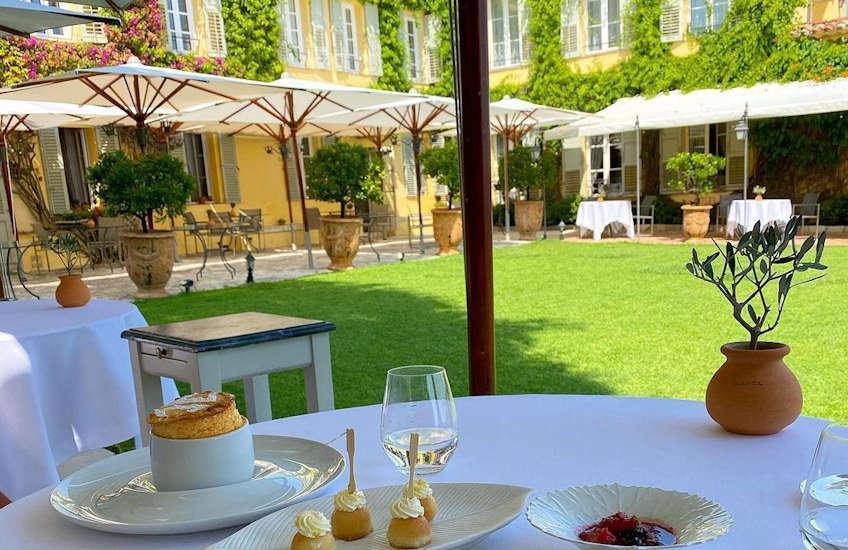 Family holidays in France: Velorail Velorail at Sainte-Baume in the heart of Provence, South France, is just a perfect day out if you are looking for something a bit different that can entertain children of all ages during your family h... 63 views Wed, 09 Dec 2020

Porquerolles Island restaurants in South... The beautiful island of Porquerolles is located just off the coast of the French Riviera, close to Hyeres and Toulon. The island has a number of good restaurants ranging from beach snacks to tradition... 100 views Sat, 05 Dec 2020

Villa Alarelle is a fantastically well-equipped large luxury villa rental in the Carcassonne region of France with a swimming pool, perfect for an extended family or a group of friends. The villa is located in the historical hillside village of Montouliers with outstanding views overlooking the surrounding vineyards. Villa Alarelle offers 6 bedrooms , 4 Bathrooms, a 70m living area, a fully fitte...
READ MORE
Villa Bellevue vacation rental South of France with pool sleeps 8-10

Villa Bellevue vacation rental in the South of France has an idyllic setting amongst vineyards & countryside and benefits with its own private pool. This vacation rental property is located in the pretty village of Cabrerolles, near Beziers, in the wine producing region of the Languedoc Roussillon. The villa can sleep 8 guests very comfortably in its 4 bedrooms and is a perfect home from home for ...
READ MORE
Les Grimaudieres St Tropez apartments rental with pool sleeps 2-4

This 1 bedroom apartment is located in the millionaires paradise of Port Grimaud, near St Tropez. This first floor south-facing apartment sleeps 2 - 4 people is situated in the heart of Port Grimaud within walking distance of a quiet sandy beach overlooking St Tropez. An ideal self catering holiday rental apartment with pool on the Cote d`Azur in the South of France. {slider title=" About the pro...
READ MORE