The modern art museum in Nimes, the Carre d'Art, was built in 1993 by English architect Norman Foster. The museum quickly established itself as one of the best museums of contemporary art in the South of France. The museum sits opposite the Maison Carree, one of the finest examples of a fully intact Roman temple, dating back to the 1st century BC.

Echoing its inspiration in Paris, the Georges Pompidou Centre, the Carré d’Art in Nimes is home to both a multimedia library and a contemporary art museum. The museum features a collection of nearly 600 items.

Things to do in Southern France: Carre d'Art Nimes

During 2021, the Carre d'Art, Nimes, will feature a visiting exhibition from the Iranian/German artist, Nairy Baghramian. The exhibition features a range of sculptures, photographic works, and drawings that explore the relationships between everyday objects and the human body. Her sculptures in particular feature a diverse range of materials from steel, to glass, silicon, resin, cork and leather.

Nimes is a great place to visit in the South of France. This vibrant French city has a long history. Nimes owes its origins to the Emperor Julius Caesar's defeat of Mark Anthony and Cleopatra in Egypt. He rewarded his soldiers by building Nemausus, a grid like city in Southern France on the Via Dormitia, the main Roman road that ran along the Mediterranean coast from Rome to Barcelona.

Here the veteran soldiers retired to their farms and enjoyed the spoils of their wars. In honour of their famous victory, the soldiers adopted the symbol of a crocodile (the Nile) chained to a palm tree. Wherever you go in Nimes you will see this symbol - on the streets, on fountains and on buildings.

Nimes has its own amphitheatre, which is probably the most well-preserved Roman amphitheatre in the world. Built in the 1st Century, the amphitheatre is 133m long, 101m wide and 21m high. It still holds 21,000 spectators.

After the city was taken by the Barbarians the Amphitheatre was used as a fortress. After the 12th century when Languedoc was incorporated into France, the amphitheatre fell into disrepair and became the site of a small village situated within the walls of the arena.

It was only in 1786 when a group of scholars persuaded the city authorities to demolish the 200 houses and 3 churches and forcibly remove the inhabitants that the arena was restored to its previous magnificence.

As the town grew, Nimes' demand for water to fill its Roman baths and to irrigate the town, outstripped its own spring water supplies. As a result and with typical Roman single-mindedness, they built a 50km canal to bring water from Uzes. Along the route they constructed the fabulous Pont du Gard aqueduct over the River Gardon.

This canal network served the town well for over 3 centuries. 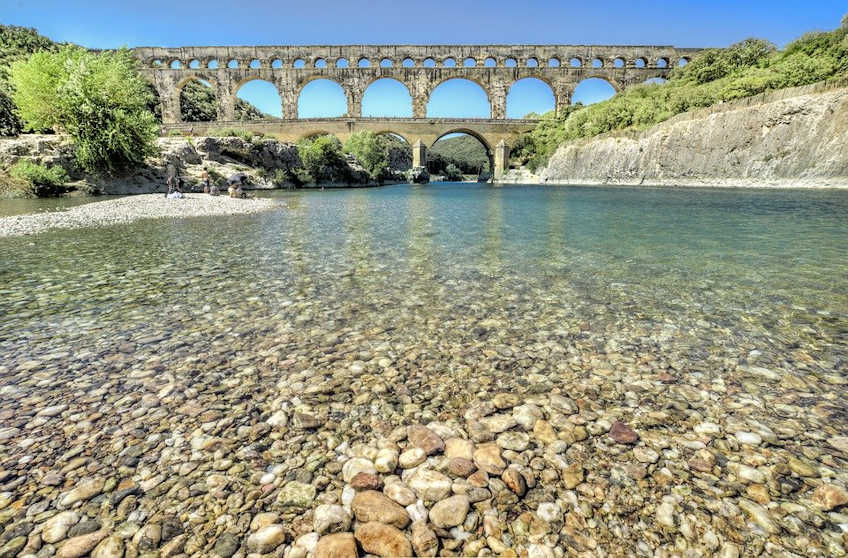 Today Nimes is endowed with some outstanding Roman monuments. The Maison Carree (or "square house") is a perfectly formed temple that was once the centrepiece to Nimes' forum.

It was built in 4AD at the intersection of two major Roman roads (one leading to Spain - the via Dormitia - the other going north to Germany and Britain) and was dedicated to Emperor Augustus' adopted grandson.

Maison Carree is regarded as the world's best preserved Roman temple and despite its patchy history over the years (it was once used as a stable in the middle ages) it has been cited as inspiration for Thomas Jefferson's Virginia Capital building and the Magdalene Church built by Napoleon in Paris.

Today Maison Carree sits in a sunken position in its own square, ringed by pavement bars and off-set by the impressive modern Carre d'Art building. Inside Maison Carree  you will find a small museum, providing details and excavations of the building itself.

In the 18th Century, the local  textile merchants in Nimes created a fund to pay for the renovation of stagnant pond that was once the site of the freshwater spring. When the engineers started work on the site, they were amazed to discover an extensive temple complex around the site, later named the Temple de Diana. This led to further appeals for public donations to create France's first public garden - Jardins de la Fontaine - with wonderful neo-classical statues and walkways.

Don't expect to see anything as near as complete as the Maison Carree. The only thing you can see of Temple of Diana today is some arches and ruined walls situated in the beautiful Jardins de la Fontaine. This is a shame because the original temple remained in tact up until the middle ages and was used by Benedictine monks as a place of worship.

But the Temple was ransacked by Hugenot mobs during the Protestant uprising in 1704. Up above the Temple, is the oldest remaining Roman monument in Nimes, the Tour Magne, a 34m tower which nobody has ever figured out what it was ever used for (various scholars have guessed at it being used as a watch tower, an observatory and a water tower).

Nimes other claim to fame is that it was the original source of the famous blue cotton cloth "de Nimes" (thus later "denim") that was imported to America by Levi Strauss for use as clothing for working men.

One of Nimes famous sons is Jean Nicot, who first introduced tobacco into France in the 16th Century and who spawned the term "nicotine".

If you were looking for a good day out in the South of France with the family, I would recommend visiting Uzes for a late breakfast, the Pont du Gard for a picnic in the afternoon and Nimes for an evening stroll and dinner. My best memories of Nimes are walking around the old streets, looking in shop windows, taking pictures of the monuments and shopping in Les Halles - the old food market with its modern shopping centre extension. I would also add that I find the inhabitants of Nimes to be the happiest and most fun-loving people in the South of France. If you happen to be in Nimes during one of the 3 big festivals that take place during the year, then you will certainly see what I mean.