The best beaches in France are undoubtedly to be found on the French Riviera coastline in Southern France. If you are coming to the French Riviera on holiday this summer, then we have hand-picked the best French Riviera beach resorts to visit in 2021. All of these beaches have been road-tested by our 3 sons during many days spent on the beach in the Cote d'Azur. The main selection criteria involved size of waves, opportunities for hurling yourself off something high into the sea, good snorkelling, a decent view, not too crowded and places to get a drink and ice cream nearby.

Best beaches in the French Riviera

We have spent many weeks driving along the whole of the French Riviera from Menton in the East to St Tropez in the West. I would now probably classify myself as a bit of a beach snob. I am not going to climb down a steep cliff to sit on a pebbly beach where you burn the soles of your feet stumbling into the sea. Equally, I don't see any enjoyment in being packed like Sardines on a thin strip of beach. I also have the attention span of a goldfish, so unless the beach has some nice view of a secluded cove or the mountains behind, then after about 30 minutes I am off.

If I am honest, the French Riviera has some pretty shit beaches which trade off the fact that they are located on the Cote d'Azur. You will get over-charged for parking (if you can find a place at all). The beach bars have pretty shoddy service and astronomical prices. And the beaches themselves are just not that great. However, there are some hidden gems amongst the dross

Here is our selection of our favourite 5 best beaches in the French Riviera. We have chosen these because they have given us some really fond memories over the years and I don't think that you will be too disappointed if you visit them. 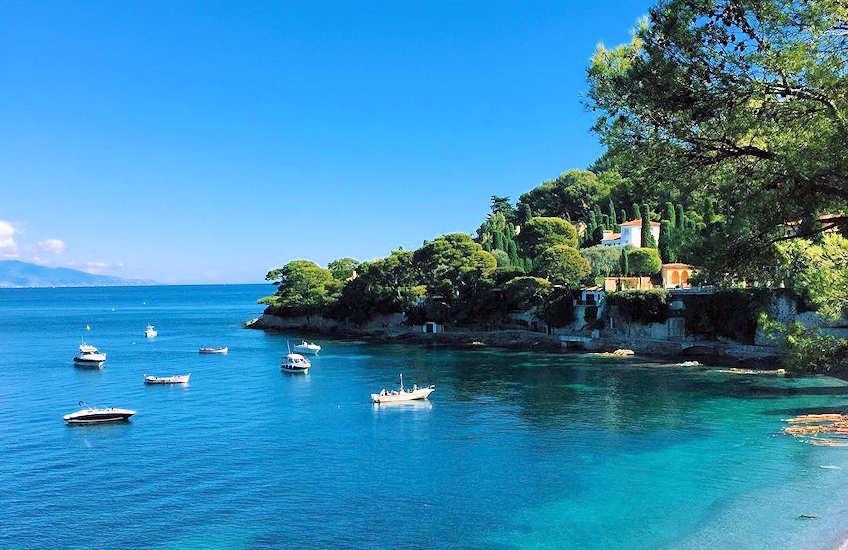 Cap Ferrat is reportedly one of the richest areas of Europe. It rivals Monaco for more millionaires per hectare. Cap Ferrat first became the destination of the rich and famous just after the First World War. King Leopold II of Belgium, started the trend for building magnificent villas. The writer W. Somerset Maugham bought Villa Mauresque in 1928 and lived there before and after World War II. Current famous residents include Microsoft co-founder Paul Allen in Villa Maryland and musical composer Andrew Lloyd Webber.

Just below the classy village of Saint-jean you will find a tree lined stretch of sand with a shallow bay. The water is crystal clear and you can get a wonderful view of the palatial mansions by swimming out into the bay. The beach of Paloma Plage is popular with divers (on account of the clear water). The public stretch of beach at Paloma Plage can be found by heading towards Paloma point and walking down the short footpath to the beach.

The beach at Cannes tends to divide people into two camps. Some people love the feel of this beach right in the centre of glamorous Cannes, with its world famous film festival. Others complain about this crowded South France beach and the quality of the sand. To be honest I am in the latter category and would recommend you make the short drive round to Theoule-sur-mer (a lovely little coastal village). The long strip of golden sand to the north of Theoule-sur-mer is a quite calm, with a few bars and cafes around to give you respite from the sun.

The public beach at Cannes is situated near to the Palais des Festivals. Also look for signs to Plages du Midi and Plages de la Bocca on the western edges of the town. Yes you may get to see some of the 'beautiful people' wandering around the beach side promenade in central Cannes, but they are more likely to head for some of the private beaches owned by the hotels.

Like Cap Ferrat, Cap d'Antibes has had a long association with the rich and famous. Since 1870 the glamorous Hotel du Cap high up on the dense tree covered cliff has been one of the most luxurious resorts in the world. Guests who have stayed there included Marlene Dietrich, the Duke and Duchess of Windsor and Winston Churchill. Elizabeth Taylor and Richard Burton conducted an affair and honeymooned there. Pablo Picasso came to the town in 1946 and was invited to stay in the castle. During his six month stay, Picasso painted and started his fascination with ceramics and tapestries. When he departed Picasso left a number of his works for the municipality. The castle has since officially became the Picasso Museum. Roman Abramovich, the Russian billionaire and owner of Chelsea football club has a palatial mansion in Cap d’Antibes

There are 48 beaches along the 25 km of coastline that surround Antibes and Juan les Pins. The main public beaches are La Salis, on the edge of Le Cap d'Antibes and Plage du Ponteil. But be warned, the public beaches are usually very crowded in the summer time. The bay of La Garoupe has some beautiful soft sand beaches and provides a magnificent view of Antibes. This is also a popular spot for snorkelers, attracted by the clear blue water. Classy (and expensive) beach clubs occupy most of the beach spaces, the coolest ones reportedly being Plage Keller and Plage Joseph. 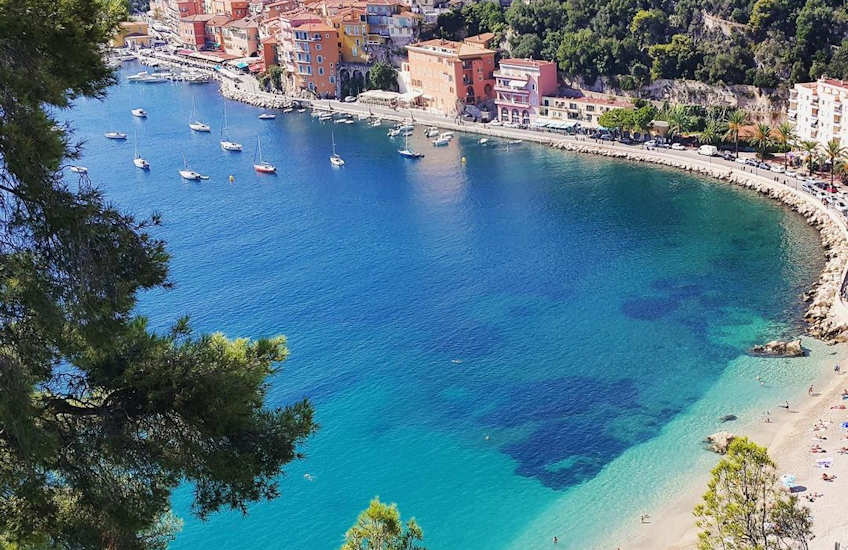 Villefranche-sur-mer, is a picturesque old fishing village located just a few kilometres outside of Nice. Compared to other beaches surrounding Nice, the beaches at Villefranche-sur-mer are relatively quiet even in the summer months. Plage des Marinières is the main beach and is located at the north end of the bay. It stretches for 1 km under the track of the railway line linking Nice to Italy. The deep bay off Villefranche was exploited by the French and American navies for many years and is now a popular mooring point for cruise liners. The old town and the bay have been used as the setting for many famous films, including Hitchcock’s To Catch a Thief, Never Say Never Again with Sean Connery, The Jewel of the Nile with Michael Douglas and Dirty Rotten Scoundrels with Steve Martin. These South France beaches are popular with families and snorkelers (there are plenty of rocky inlets to explore). The beaches are lined with some nice cafes and shops. The Plage de la Darse beach, South France, is made up of sand and some pebbles and is located behind the main jetty of the harbour of La Darse.

Port Grimaud is located in between Saint-tropez and Sainte-maxime. This seaside town was created by architect François Spoerry in the 1960s and built out of the marshes of the bay of Saint Tropez. Built with small canals like Venice, the mainly traffic free town is popular with boat owners as most properties come with their own berth. The beach, located slightly away from town is one long stretch of golden sand. The sea is shallow and gently sloping, making it perfect for families. Windsurfing and kayak hire is also available. Port Grimaud beach does get quite busy during the high season, but it is probably one of the best beaches around St Tropez (the other notable beach being Tahiti beach on the other side of Saint Tropez - although be careful not to venture into the Naturist section).

Moving along the French Riviera coast from St Tropez towards Toulon, Rayol Canadel-sur-mer is a small stretch of coastline, which rarely gets busy, even in August. This is the coolest beach in the area, and has a few great bars. Our kids loved going to this beach because there is a diving platform a little way out in the bay. The beach can be tricky to find and the best way to find Rayol Canadel-sur-mer, is by taking the track from the airstrip at nearby Cogolin, past the campsite and up over the hill. The views coming down the other side of the hill are magnificent.