It is quite extraordinary that the village the size of Mougins in South France has a world class Art museum to rival any National collection. But there again, there are not many villages that happen to have a multi-millionaire art collector like Christian Levett living nearby. The Mougins Classic Art Museum (MACM), was established in 2008 and is essentially a private collection open to the public.

The Mougins Classic Art Museum (MACM), was established in 2008 by Christian Levett, a wealthy Hedge-Fund Manager and local resident of Mougins. Levett already had an enormous private collection of ancient and modern art and he was helped in establishing the Museum by the current Museum Director, Mark Merrony.

The Mougins art museum features works spanning 5,000 years of civilisation including artwork by Picasso, Matisse and Jean Cocteau; alongside collections of roman coins and ancient armour.

You might ask why this museum is located in Mougins and not in Nice or Cannes, but there are 3 driving factors.

The first is money. It is clear that without Levett's wealth the museum would not have been created in the first place. His influence on the Museum in terms of his passion for coin collections, glassware, pottery and ancient history; is paramount in the displays on show.

Finally, archaeological digs around Mougins have established that the hill on which the town now sits was once an important Roman hill-fort. So all these 3 factors combine to create an amazingly eclectic collection of art from the last 5,000 years of civilisation. The way the museum is arranged it attempts to show how the art of the ancient world influenced neo-classical work and still influences Modern artists. 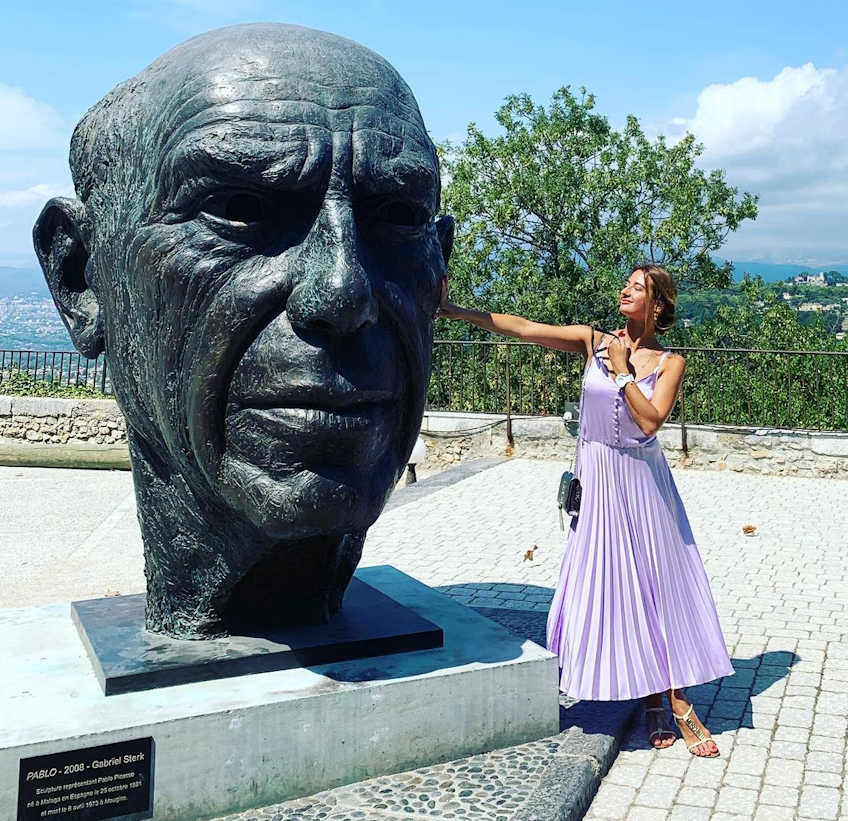 The Mougins Museum of Classical art is essentially a private collection open to the public. The museum is located in a medieval house in the centre of Mougins and the displays are spread over 4 floors, providing over 400m2 of display space.

Although the majority of objects on display are collections of ancient and neo-classical artefacts, the museum also includes works by artists who lived close to Mougins, such as Mark Chagall, Jean Cocteau, Man Ray, Henri Matisse and of course, Pablo Picasso.

What is quite interesting is the way the Mougins museum is organised. Whilst the majority of the collections are arranged in chronological order, the modern art pieces are inserted among the displays. Thus you have Andy Wharol's Birth of Venus, next to an ancient statue of Venus; and the bust of the Emperor Caracalla alongside a drawing by Henri Matisse of the same bust.

The Mougins Museum of Classical Art contains over 700 artifacts and artwork. The basement of the MACM houses the Egyptian Gallery. This contains the oldest dating relics such as funeral masks, a sarcophagus and various Egyptian artifacts. The Egyptian Gallery also features works by Marc Chagall, the American sculptor, Alexander Calder and the local french artist, Jean Cocteau.

On the ground floor of the Mougins Museum is the People and Personalities collection. This contains an arrangement of Greek and Roman statues and busts, as well as Modern sculptures by Marc Quinn and Damien Hirst. You will also find artwork by Henri Toulouse-Lautrec, Henry Moore, Francis Picabia, Paul Cezanne, Henri Matisse and the British Sculptor, Antony Gormley.

The first floor of the MACM in Mougins contains the Gods and Goddesses Gallery, with displays of Greek and Roman bronze and marble statues, pottery, glass and silverware. The gallery also features a collection of ancient coins and jewelry. Integrated within the displays are works by Flemish painter, Peter Paul Rubens; the French sculptor, August Rodin; the locally born Nouveau Realism French artist, Yves Klein; Andy Warhol, Picasso, Amedeo Modigliani and Salvador Dali.

On the top floor of the museum is the largest private collection of Greek and Roman Armour and armaments in the world. There is an extensive display of helmets, body armour and shields, alongside a range of military influenced art.

Christain Levett, the founder of the Mougins Museum is clearly a wealthy man, but he is also an avid student of history. Early in his career as a Financier, Levett was based in Paris and here he made weekly visits to the Louvre and the Musée d’Orsay, where he became fascinated with 18th and 19th century furniture.

He also revived his childhood passion for collecting coins, but this time he invested in Greek, Roman and old British coins collections. Once he had caught the collection bug, he couldn't stop. Next it was Roman marble, then ancient Armour and military relics. Pottery, jewellery, glassware and silver antiquities soon followed.

Originally a resident of Monaco, Levett bought a house in Mougins in 1995, partly drawn to the area by the Roman and Greek heritage (the Romans had built a hilltop fort in the present location of Mougins).

Levett spoke to the Mougins municipal authorities in 2007 about setting up a Museum to display his collection and the MACM was established in 2008. It took a further 3 years to find the right premises in Mougins to house the museum, to undertake the extensive refurbishment work and also to add to the collections on display.

Levett was aided in cataloguing and organising the collections by Mark Merrony, who became the Director of the Museum. Dr Merrony, read Archaeology at Oxford University, with a specialism in Roman architecture and Viking artefacts.

More information can be obtained from Mougins Museum